GET YOUR COPY here

when a Chicken is not a Chicken

Born in Greece in the tumultuous year of 2020, during a global pandemic and the reign of the idiot President.

Tokyo was found abandoned in an industrial warehouse battling a serous illness that nearly killed him. He was subsequently adopted by PLAN B. Artist Studios and appointed artist in residence.

At an early age despite his humble beginnings, Tokyo showed prodigious and extraordinary sculptural skills, displaying considerable talent for Deconstructivism. Tokyo’s rare ability to express our chaotic world, taking it apart bit by bit, has been described as a visionary, if vicious, commentary on societies double standards: fake news, neo-liberal politics and 21st century fascism. Not surprisingly, Tokyo’s work has quickly risen to international acclaim within the ranks of the Art World.

It gives us great pleasure to present his first monograph “when a Chicken is not a Chicken” a survey of this young artist outstanding work, and would like to express our gratitude and admiration to Tokyo for his courage, conviction and innovative sculptural vision.

Join our International Driftwood Sculpture workshop. Forage for your own driftwood pieces in one of the most beautiful wild beaches in Greece and create your own unique sculpture under the guidance of renowned international artists.

Discount for artists, students and children. 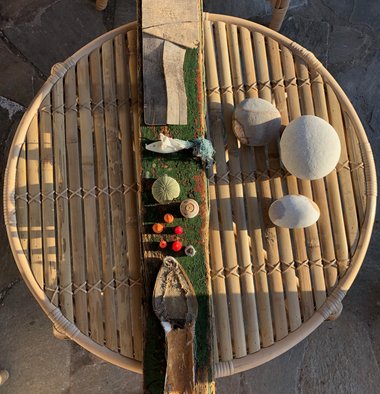